Since 1983, the restaurant on the 20th floor of One State Street has had a singular mission: to host its guests in the finest dining establishment possible. Founded and maintained by The Hartford Steam Boiler Inspection & Insurance Company, ON20 continues the tradition today.

Under the guidance of Hartford native Executive Chef Jesse Powers, the culinary team prides itself for its “innovative and progressive” cuisine with unobtrusive and unencumbered service. ON20 was voted one of the Top Ten restaurants for service in the country by OpenTable diners and was named one of the top scenic view restaurants in the country. 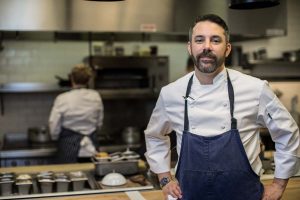 Jesse Powers, a Connecticut native from Manchester, has worked at some of the best restaurants in the state. Working for Steve Cavagnaro at Cavey’s in Manchester Jesse learned the traditional cuisines of Italy and France, with both an attention to detail as well as a respect for ingredients at their peak. At both The Copper Beech Inn in Ivoryton and Millwright’s in Simsbury, both under Tyler Anderson, he explored contemporary American cuisine with a focus on New England ingredients and honed his leadership skills. He left the leadership of Tyler Anderson in October of 2016 to become the new Executive Chef at ON20, bringing new ideas and flavors to the 20th floor of the Hartford Steam Boiler Building. 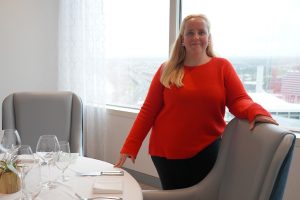 Born in South Africa, Dominique grew up in a rich environment surrounded by diverse culture and cuisine. Upon moving to the United States, she began her career in the restaurant industry at The River Tavern in Chester, CT. After graduating high school Dominique went on to explore a variety of opportunities including convention center kitchen management, outdoor leadership education and corporate operations management. Additionally, she spent time living in Tanzania, Thailand and the Dominican Republic assisting in free health care clinics and teaching English. Dominique has always been passionate about food, trying new things and bringing people together. Being part of the ON20 team allows Dominique to bring all of that together in conjunction with her extensive experience in logistic management. She can’t wait to plan your next special occasion tailored to your exact needs!

Where are you located?

We are in the One State Street building at 400 Columbus Boulevard, on the 20th floor.

What are your parking options?

We have an attached parking garage which we can validate.

Do you take walk-ins?

We do accept walk-ins when space allows. A reservation is strongly recommended in the dining room. Our bar is available on a first come, first serve basis.

May I arrive earlier for a cocktail?

Yes, please join us at our bar area.

What is your dress code?

Although we don’t have a formal dress code, you will find yourself most comfortable in business casual attire.

May I have a window seat?

Although we do not guarantee window seating, we will make every effort possible to accommodate those requests.

What if I have dietary restrictions?

We will make every effort to accommodate all food allergies and dietary restrictions. If you are planning on enjoying the tasting menu, we ask that you inform us of your restrictions upon making your reservation so that we may tailor the experience to your needs.

Do you have a corkage fee?

We have a corkage fee of $25 for any bottle of wine not on our wine list.

What is the largest table you can accommodate in the dining room?

We can accommodate a party of nine in the dining room, anything larger will need to be booked through our private events coordinator.

Why does my credit card statement say an amount higher than I signed for?

Some financial institutions will place a hold greater than the amount signed for. These holds will go away after the transaction clears. Please allow 3-5 business days for this matter to resolve.

Why is there a 20% service charge added to my check?

We add a 20% service charge to all checks to allow us to pay our staff a fair wage. No additional gratuity is required, however, may be left at your discretion.

Please note: Parking entrance is located on Columbus Boulevard (which is a one-way street). Look for the ON20 sign to the left of the garage entrance — Park on the 3rd floor for easiest access to the restaurant. Then proceed to the lobby to take an elevator to the 20th floor. If you park on the first or second floor follow the signs to the lobby and take the elevator to the 20th floor. Garage parking validated for Happy Hour and Dinner.

What are you looking for?